Micheal Collier was born in the 1780 in the Bellewstown/Julianstown area of Co. Meath, which was part of the old coach route from Drogheda to Dublin. Even at an early age he was apparently showing an instinct for his future career by stealing fruit and fowl from local farmers. As a young man he fell in love with a girl whose father and three brothers were horse-thieves, which at the time was a hanging offence. The family members were captured and on their way the prison in Trim to meet their fate but Collier organised their escape. At a public house where the prisoners and guards were resting on their way to Trim he got the constables intoxicated and slipped files to the brothers so they could free themselves and overpower the guards. As we’ll see public houses played a big part in Collier’s life!

This made him a wanted man and very soon afterwards he established himself as a successful highway robber. As for his first love that set him on his life of crime, unfortunately it didn’t last as “He related with great bitterness how this very woman afterwards deceived him by going off with another.”

Like a good gentleman highwayman he operated a code of conduct whereby ladies on coaches were allowed to keep their jewelry (how often this happened is debatable!) while he also shared some of his spoils with the poorer classes of society, making him a popular figure. 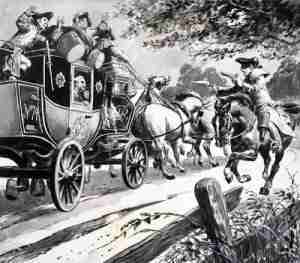 The story goes he would frequent The Boot Inn, which still operates in Cloghran County Dublin, where stagecoaches would regularly stop off on their way to and from Drogheda. There he would size up the potential gains from each stagecoach and select his targets.

Probably his most famous hold-up was of the Dublin-Belfast mail coach when he arranged a number of dummy figures, dressed in coats and hats, on a hedge at the side of the steep-rising out of the road. When the stagecoach came to a halt Collier roared at his ‘men’ to “let fly with musket, pistol and blunderbuss at the first sign of resistance.” The frightened passengers quickly handed over their money and valuables and Collier bid them a safe journey.

Our favourite tale is the one of another gang claiming to be Collier’s gang which robbed a man by the name of Hugh Ward. When Collier heard of this affront he waited for Ward on his next journey and handed him the exact amount of money that was stolen from him, telling him the real Collier gave to the less fortunate, not took from them. 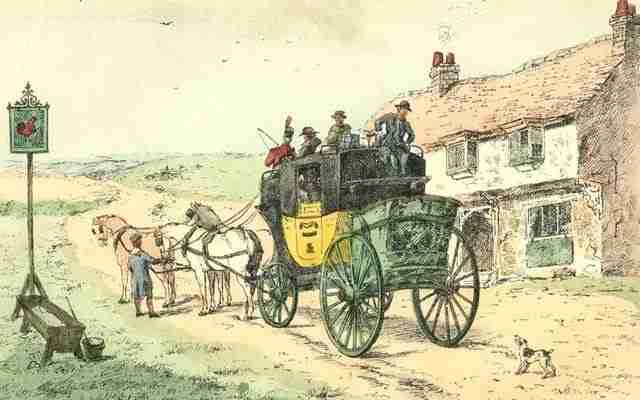 Due to his success he no longer needed to use dummies and his gang grew to twenty-four however over the years fourteen of his fellow highwaymen were hanged, six were shot and two were transported to Australia, yet he always managed to escape. The first time he was captured he was sentenced to be hanged in Trim Jail but on the eve of his execution he escaped with the aid of file supplied by a female visitor and swam across the River Boyne to freedom. The second time he was arrested was at the Cock Pub in Gormanston County Meath following a session with it’s patrons with the gains from his latest heist.

However rather than being sent to the gallows he was sentenced to seven years transportation abroad which in turn was commuted to allow him to enlist in a “condemned” legion in West Africa and later the West Indies. It’s widely thought he was allowed to join the army because of someone with great influence, and for reasons unknown, who interceded on his behalf. In 1815 he was discharged and travelled to North America where he became a manager of a plantation.

He returned around 1820 and spent time as a publican in Ashbourne and as an old man he was described as “a dauntless and powerful man, exhibiting all the marks of great muscular powers; and though it was evident his best days had passed away, he yet seemed like an oak that braved the storm and stood the shock of time, defiant as ever. He was upwards of six feet high and nearly fourteen stone weight, extremely broad in shoulders and made proportionately”. He died of cholera in 1849 and is reported to be buried in Cord Cemetery in Drogheda however his grave has never been fully identified.

The Execution of the Highwayman James McLaine

Jack of Ireland, a Medieval Outlaw

This podcast from the Irish History Podcast is about a Irish man who was an outlaw in all but name. While Jack would avoid being declared an outlaw, his life gives a much better sense of what a medieval outlaw was like rather than the oft recounted tales of Robin Hood. This is the real life story of an Irish man who ran amok across the North of England but was protected by friends in very high places!

Not many people, especially a highway man, can leave the legacy of having an area named after them! But that’s exactly what the activities of Robert Collier managed to do and the townland of Pass if you can exists to this day in West Dublin. So where exactly is it we hear you ask. The townland is is located at 53° 23′ 4″ N, 6° 27′ 24″ W and according to townland.ie it is 0.14 square miles in size. It borders the following other townlands:

It’s mostly farmland but we’re pretty sure the small country lanes that still exist were the same ones Robert would carry-out his robberies on. Not only that, beside his birthplace of Bellewstown there is a Collierstown!